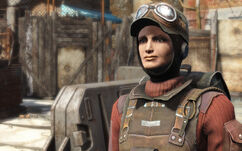 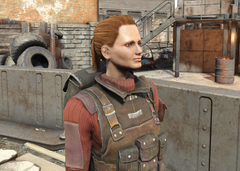 Scribe Haylen, registration HN-118FS is a field scribe of the Brotherhood of Steel, living in the Cambridge Police Station in the Commonwealth in 2287.

Sometime after the Brotherhood-Enclave War, as the Brotherhood began recruiting throughout the Capital Wasteland, Haylen was accepted into the organization with Rhys sponsoring her induction and Danse sponsoring her training. She became a scribe, serving in the Brotherhood's Order of the Quill. By 2287, she, Danse, Rhys, and four other soldiers had been assigned together to form Recon Squad Gladius, tasked with investigating the The Commonwealth after the loss of Recon Squad Artemis three years prior.

The mission was difficult from the moment of their arrival; after establishing a stronghold at the Cambridge police station, Knights Worwick, Brach, Dawes, and Keane all perished from attacks by raiders, super mutants, and feral ghouls respectively. Worwick's death was especially hard on Haylen; she spent two days treating his wounds before Danse ordered her to put him out of his misery via an overdose of painkillers. Despite their losses, Haylen still carried out her assigned tasks, monitoring energy readings from an unknown source and modifying the police station's radio tower to eventually call in reinforcements.