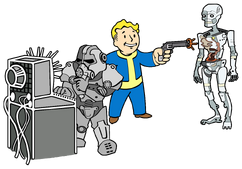 Paladin Danse asks the Sole Survivor to follow him to ArcJet Systems where he hopes to get his hands on a deep range transmitter to repair the Brotherhood of Steel communications array.

Once the Sole Survivor has agreed to assist Danse, he will order Scribe Haylen and Knight Rhys back into the police station. Follow them into the police station, where Danse offers the option to "resupply yourself." Take all the time required to prepare for the mission, which may include talking to Scribe Haylen or Knight Rhys. Once the Sole Survivor is ready to start the quest proper, they should speak to Danse and tell him that they're ready to head out.

Paladin Danse will either lead the Sole Survivor west to the abandoned ArcJet Systems building or they can just meet up at the building. Choosing the latter option will result in missing the following scripted encounters and their accompanying loot and experience.

Along the way to ArcJet Systems, a group of raiders will be found ambushing some traders under the railroad bridge. After the fight is over, the corpses will contain loot that must be looted immediately after the fight or not at all, as the corpses will despawn after leaving the area. Danse and the Sole Survivor may also be attacked by the local wildlife (such as mongrels and bloatflies) before finally reaching the ArcJet building.

Once reaching the building, check in with Danse about the mission - he will stress the need for "no heroics" before entering the building. Follow Danse and speak with him about the building's automated security when he pauses in the security room. He will express his dismay at discovering the presence of Institute synths.

Continue fighting through the building with Danse. The second floor corridor just outside the CEO's office is lined with turrets. Either fight through the hallway or hack the terminal (Novice difficulty) in the server room nearby to disable them. Continue following Danse to the elevator leading down to the ArcJet engine core.

Paladin Danse and the Sole Survivor will need to reach the top of the engine core in ArcJet Systems where the transmitter is located. However, the power must first be restored to the elevator. This first requires searching for a way to restore power to this section of the facility. This is done by hacking the facilities terminal in the nearby maintenance area (Novice difficulty).

After starting the auxiliary generators, either return to help Paladin Danse defeat the synths which just arrived or use the Engine Start button to activate the Engine Core's rocket and watch the synths fry. After defeating all the synths with either method, check in with Paladin Danse, then take the elevator.

Clear out the control room and search the synth corpses for the deep range transmitter. Once the transmitter is acquired, leave the facility via the control room elevator. Outside, Danse will reward the Sole Survivor with Righteous Authority and offer them the chance to join the Brotherhood. Regardless of whether the Sole Survivor joins or not at this time, Danse will be found back at the Cambridge Police Station, where additional quests can be obtained from him, Haylen and Rhys if the Brotherhood is joined.