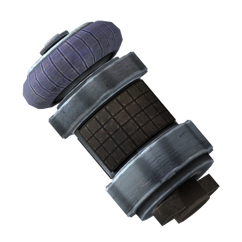 “The Pulse Grenade is the most effective weapon against robotics. Upon detonation, an intense electromagnetic pulse is emitted, severely crippling any robotics within the explosion radius. They are extremely handy against the many robots and turrets found throughout the Capital Wasteland.”— Research Note - Pulse Grenade

Elle crée un intense champ magnétique en explosant, infligeant peu de dégâts aux êtres biologiques mais beaucoup plus aux unités robotiques. The pulse grenade is a weapon that creates a large crackling electromagnetic pulse, dealing only minor damage to biological creatures, but far more damage to mechanical targets such as robots and automated turrets. In addition, most robots are disabled for a few seconds by the burst, leaving them open to attack.

Thrown grenades are affected by physics; they may bounce or roll unexpectedly if not thrown carefully. However, in-game physics can also be used to ones advantage by throwing grenades through doorways or bouncing them around corners to attack enemies, while remaining undetected.

Holding the fire button down for a longer period of time will increase the strength of the throw. Grenades can be thrown for longer distances than normal through successful V.A.T.S. hits. Grenades cannot be cooked to detonate earlier.

Considering its very low base damage, it is fairly safe to throw a pulse grenade at a robot at point-blank range, as it will barely have an effect on the Wanderer.

The blast of a pulse grenade