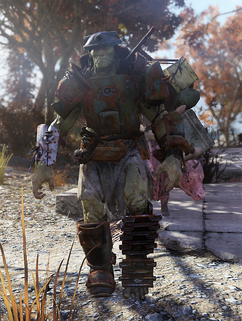 Grahm is a friendly super mutant merchant and chef living in Appalachia in 2102. He is never without his pack brahmin companion Chally the moo-moo.

Little is known of Grahm's history prior to 2102, other than what minute information he offers in his dialogue. He mentions someone to which he refers to as a "smarty," the advice of whom guided Grahm into becoming a merchant.

Being one of the few remaining both sapient and friendly humanoids left in Appalachia, Grahm will frequent areas in the Forest, presumably finding new success in trading with the residents of Vault 76 once the vault opened.

Grahm travels with Chally the moo-moo (whose name is a mispronunciation of 'Charlie'[1])and considers trading to be a game with the brahmin. He puts a great deal of personal responsibility into the overall wellbeing of Chally and will frequently engage in one-sided conversation with him on their travels.

One sunny day, the good weather made Grahm want to spend time outside and cook meat. Grahm began to have more and more of these "meat days" and wanted to come up with a name for them. Eventually, after tossing out "Meat Many Days," he decided on "Meat Week."

Sometime after Reclamation Day, Grahm and Chally hosted their "Meat Week" event close to Vault 76, with an express invitation towards the Vault 76 residents. Here, Grahm invited the residents to assist him in his grilling, in return for various prizes he'd collected through trading in the past year.

Grahm in the Ash Heap