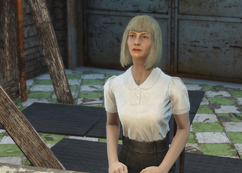 She is the secretary of Mayor McDonough and can mostly be found in her office right next to the mayor. Some residents of Diamond City believe she may be a synth. According to entries on Doc Crocker's terminal, Geneva had birthmarks removed surgically against Crocker's protests, as he feels she is naturally perfect.

During Getting a Clue, Piper and Geneva have a discussion where Piper makes a comment on Mayor McDonough and Geneva having an affair. After completing In Sheep's Clothing, Geneva somberly reveals that she was aware of the rumors circulating about her and McDonough, but claims he was just as much a mystery to her as to anyone, and that she had a poor opinion of his temper.