The T-45d power armor is a piece of armor in Fallout 3.

Power armor can only be worn if the player has gained the Power Armor Training perk, either by talking to Paladin Gunny in the Citadel, by starting the Take it Back! quest, or by completing the Anchorage Reclamation simulation.

It can be acquired from the corpses of dead Lyons' Pride members during Take it Back, or reverse-pickpocketing: Sentinel Lyons, Knight Captain Gallows, Paladin Vargas, Paladin Glade, Paladin Kodiak and Knight Captain Dusk.

The Army power armor and matchting helmet can only be acquired on the PC version using console commands. It has a U.S. Army band on each shoulder. 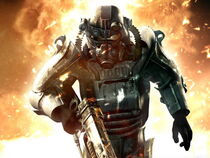 Brotherhood of Steel soldier in front of the Capitol building

The power armor in the Fallout 3 teaser. 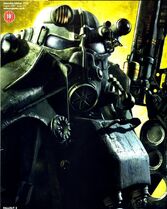 Brotherhood Paladin with a laser rifle. 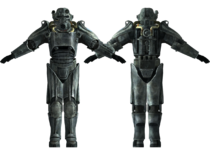 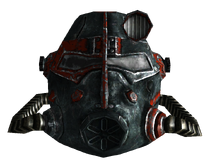 The Lyons' Pride logo on the shoulder pad 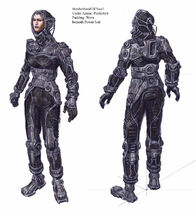 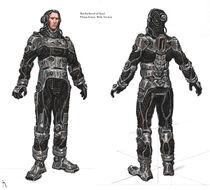