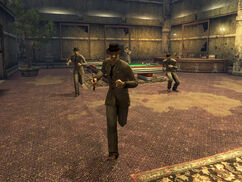 Notiz: For the "Wildcard" achievement (30G), you also have to complete Wild Card: Feinschliff

To start the series of quests, talk to Yes Man after confronting Benny at the Tops casino.

Yes Man needs to enter Mr. House's computer network. To do so, you must get the platinum chip from Benny, and then kill or disable Mr. House. To disable Mr. House, the Kurier must have already entered the Lucky 38 penthouse suite. On the wall to Mr. House's right (Courier's left), there will be a terminal. Activating the terminal will come up with a single option, that is, to open a hidden wall. The new entrance will lead to the antechamber, which leads to an elevator. The elevator is activated by the terminal next to it, and takes you to Mr. House's control room, where an aged Mr. House resides. Activating the control panel to the left of the walkway gives the player a choice to open the chamber keeping Mr. House alive. You may then allow Mr. House to live, but allow Yes Man to enter the system, or kill Mr. House and let Yes Man into the system. After dealing with Mr. House, get Yes Man from the Tops casino, where he will instruct you to follow him to the Lucky 38. You can then meet him inside the penthouse suite, where he will use the platinum chip to enter Mr. House's network.

Here for a video walkthrough.

Yes Man needs to know which "tribes" out in the Mojave will help or hinder him. Specifically, Yes Man wants you to meet with and learn about the Brotherhood of Steel, the Omertas, the White Glove Society, the Great Khans, and the Boomers. You must either meet with the groups, learn about their history, and tell Yes Man that they can be ignored, or you must do multiple quests for each "tribe", putting them into alliance with you and Yes Man.

Mr. Houses Sekuritron army is in desperate need of an upgrade. With Yes Man in charge, the securitrons belong to you, so it would be to your best benefit to upgrade their model. Go to Das Fort via the Cottonwood Cove ferry (note that if you have the Mark of Caesar you will be granted definite entrance to the Fort). Follow the path up to the top of the hill. You will be led to a drawbridge, which will take you to the Fort's camp. From there, head along the left side of the camp. A weather station will be at the end of the left-most camp. Inside are three Praetorian Guards who will attack you upon entrance (the one to the right of the entrance might start a quick conversation). Staying in alliance with Caesar will cause them to give you your weapons back. Failing the quest Beware the Wrath of Caesar! will cause them to be hostile (this can be avoided by starting the quest Render Unto Caesar). If the latter is true, they will put up a hard fight, even for skilled and high level players, as they all have ballistic fists. Insert the platinum chip into the console to the left to open the bunker. Note that there is a small radiation level (1 Rad/sec). Proceed to the end of the bunker and insert the platinum chip inside of the console at the end of the bunker. Return back to the Lucky 38 to view the newly upgraded securitrons, as they step up from 9mm rounds and laser shots to missiles and grenade rounds.