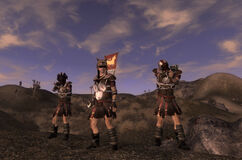 Activating the quest can be done through several means. Completing the main story line quests of any other faction (the NCR, Mr. House or Yes Man) can activate it, as can gaining infamy with the Legion. In the former case, the quest will activate as a warning. Completing one more mission will cause it to fail. If triggered by Legion infamy, it will activate and fail on the spot. It will only activate after you have been cleared of your Legion infamy (if applicable) following the completion of Ring-a-Ding-Ding!. Or after dealing with the Great Khans during Für die Republik, Teil 2 den as siding with the NCR does not require confronting Benny.

Once failed, the Courier's reputation with Caesar's Legion will immediately turn negative, which in turn may cause the appearance of Legionary assassins by triggering Caesar's Foe. The Courier is also proclaimed "in damnatio memoriae" (condemned in memory).