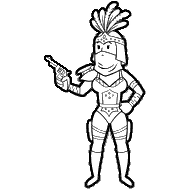 With this perk, Miss Fortune will appear 10% of the time in V.A.T.S. to attack enemies. To trigger an appearance, the player character must complete a series of attacks in V.A.T.S. without killing their opponent.

Unlike the Mysterious Stranger, Miss Fortune's attacks deal low damage to an area, aiming to cripple and knockdown enemies rather than kill them outright.

Miss Fortune's gun creates a "fortune" percentage for the target.

If their fortune is under 35:

If their fortune is above 65, only the limb crippling is applied. Remember, this is all determined per shot, and Miss Fortune will more than likely empty her revolver for all 6 shots in a V.A.T.S. attack. 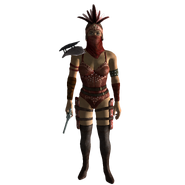