These robots serve as mobile landmines for the Chinese army. Their method of attack is to approach enemy targets and explode. They are only encountered briefly during the quest "Paving the Way" and thus, there is very little information to be gathered on them.

According to a Chinese terminal entry, the model encountered in the Anchorage Reclamation simulation is designated "spider drone Mk VI prototype", and are air dropped via bombers.

A Chinese terminal entry advises their own soldiers to be careful around the drones, even though they are configured to only attack Americans. Additionally, you will occasionally see a Chinesischer Soldat fighting one of these on the way to the Chimera Armor Depot, suggesting that the prototypes might still suffer from problems with its combat inhibitor, or might even lack one entirely.

Spider drones appear in the Fallout 3 add-on Operation: Anchorage. A modified version appears to be a projectile for the cut spider rifle weapon in the Fallout: New Vegas Add-On, Old World Blues. 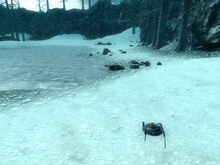 Spider drone on the way to the Chimera Armor Depot 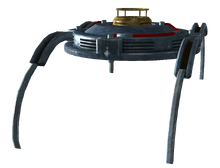