Any three skills above 20

+5 points and Tagged status on one skill 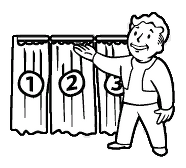 Your Fertigkeits have improved to the point where you can pick an additional Tag Skill, increasing that skill by +20% immediately and 2% per skill point spent.

In Fallout and Fallout 2, this perk also doubles all skill points previously spent on the selected skill (but not the initial 20% bonus).

The Tag! perk allows you to select a fourth Skill to be a Tag skill, which instantly raises it by 15 points. Because of the reduced properties of tag skills, this is essentially nothing more than a 15 point bonus to any given skill.

While tagged skills do not have the same benefit as in previous games, this perk is the highest skill bonus perk in the game, along with the perk Size Matters, as all others are +10. It is useful for quickly bringing a new skill up to the level of your starting skills, e.g. 60 Dietrich becomes 75, enough for a hard lock, and you can then use skill points to get it to 90.

This perk becomes more useful in Fallout: New Vegas due to the lower number of skill points received when levelling, the lack of skill Bobbleheads, and fewer skill books available. "Tag!" is equivalent to an extra level's worth of skill points with maximum Intelligence, not counting the Gebildet perk.

Your mastery over several skills has opened up another skill for your attention. Select an additional skill to tag. You will gain a permanent 5 points in that skill bought on the standard scale. Also, after buying this perk, the cost for advancing the Tag! skill is one less than normal. I.e.: 1-10: 1 11-20: 2 21-30: 3