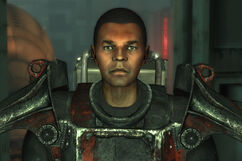 A rather morose and suspicious man, Sibley is concerned only with furthering Outcast technological findings. He seeks to share this wealth only with those in the service of the Brotherhood Outcasts. Sibley instantly views anyone entering the Outcasts' domain as a threat, and he doesn't trust McGraw's motives. He thinks the Protector is weak-willed and gives in too easily to those who might steal Outcast bounty.[1]

Sibley comes off as harsh in the first encounter, and stays that way throughout the stay with the Outcasts. He is the one in charge of the mutiny at the end of the simulation.

This whole mutiny-affair can be prevented by disposing of Sibley before one enters the simulation to begin with. He can be slowly pushed into the locked room with a Gary corpse, then one may find a power fist upstairs and power fist him to death without causing the Brotherhood to become hostile (note: they will immediately turn red upon his death, but if one waits long enough without them spotting the player character, they turn green and stay friendly).

Mitglieder der Ausgestoßenen sind Sibley, Olin, McGraw und Morrill, all of whom appear in the Operation: Anchorage Add-On for Fallout 3, appear to be named after buildings on the campus of Cornell University, including Sibley Hall, Olin Hall, Olin Library, McGraw Hall, McGraw Tower and Morrill Hall.