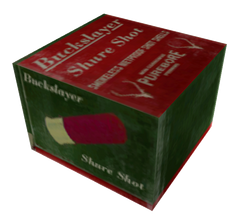 The shotgun shell is common in the Capital Wasteland, as they are carried by all enemies that use any shotgun weapon.

Shotgun shells may be found in a wide variety of containers. They can be found mostly in filing cabinets, Enclave crates, and, in rare cases, desks. Almost every merchant has a good supply of shells, and even scavengers and junk traders sometimes may have them in their inventory. Random containers average around 10, while the Scrounger perk may allow up to 46 shells to appear in high-leveled ammunition boxes. Also, gore bags are a useful but somewhat rare source, yielding good amounts of ammunition (average 24, up to 60 with the Scrounger perk). In the Evergreen Mills bazaar, Smiling Jack will have around 70 of them in his inventory, which can be stolen with no Karma loss.