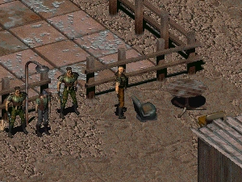 Saul was raised in Junktown, having stayed there for his whole life. For a long time, he lived with his brothers, being somewhat of a guardian to them, as they lived a poor life. One day, when raiders attacked them, he "kicked one of their asses pretty good" (into submission). Gizmo, eying his talent, employed him in the boxing ring.

Saul gets his money from bets in the ring. In dialogue, he mentions his two brothers: James, whom died in a raider attack; and Darrell, who apparently left Junktown one day to find "the treasures of the ancients." He is referring to stories the Brotherhood made up about the Glow, but cannot offer directions for the player[1].