Not nearly as common as in the Ödland der Hauptstadt, radroaches mostly inhabit abandoned homes and buildings (such as the Basincreek Gebäude) to scavenge on food that was left behind by whoever previously lived there. Some can also be found in the toxic dumps and on/around the roads in between Goodsprings and Primm, as well as being able to survive in the hostile and toxic environment of the Sierra Madre and the Cloud.

Radroaches are not normally aggressive if the player character keeps their distance. They are, however, very territorial and will attack if the player seems to threaten them, either by having a weapon drawn, invading their habitat, battling another enemy nearby (which is limited to less than a foot around the creature), or attacking them directly. Generally, they will flutter their wings and make distinct clicking sounds in warning before attacking the player.

A normal radroach, with all the qualities mentioned above.

The irradiated radroach appears the same as a "normal" radroach but with the radioactive aura of a Plündernder wilder Ghul and the ability to heal itself with a radiation blast similar to a Leuchtender. 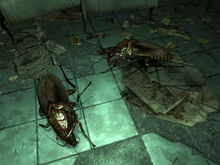