Plasma rifles or plasma casters are high-tech weapons which find numerous applications in military and industrial fields. They fire superheated bolts of plasma powered by either microfusion cells or heavy energy cells. The bolt forms in a special chamber, which is then sent down a superconducting barrel,[2][3] propelled by, and in some models stabilized by electromagnetic claws upon exiting it.[4]

Initially, the weapon was a bulky, industrial plasma caster, manufactured by Winchester Arms; while it performed admirably, it was expensive and required specialized training to use. However, later developments for the US Army would lead to a more compact design that was cheaper to produce and easier to train for, perfectly suited for urban warfare.[5]

Regardless, all types of plasma weapons have a common feature: when a Critical Hit is delivered, they can literally melt down enemies. While most industrial casters aren't powerful enough to dissolve bones too, subsequent models have no problem converting the target into a puddle of goo.

Also known as the Q-35 matter modulator, the V.35 Quantum plasma modulation matter injection rifle was created by REPCONN Aerospace engineers as part of "Project: Quantum Plasma Modulation Matter Injection Rifle,"[1] a research program overseen by Colonel Moretti of the US Army,[6] who was looking for a replacement for the aging plasma rifle designs, most importantly the Winchester P94.[5][7] The prototype was created by a team of engineers under the lead of Senior Staff Engineer Xuan Duong, using design specifications stolen from Poseidon Energy for the canceled plasma rifle project SEMELE, along with data recovered from a sabotaged REPCONN launch.[6]

This data allowed REPCONN to create a functional prototype after thirty-four failures. While prototype materials make it unsuitable for prolonged field use, the Q-35 has a longer refire rate on average - but a more consistent delay between shots, an increase in active bolt charge time, increased accuracy and a 30% increase in bolt energy.[1]

When the prototype was completed, unknown individuals conspired with REPCONN CFO Julia Masters to intercept and secure the prototype while it was in transit to the Department of Defense.[8]

There are numerous differences between this weapon and the Standardvariante in terms of combat capability:

As with most unique weapons, this weapon cannot receive modifications. However, its projectile velocity is similar to that of its standard variant with the magnetic accelerator modification. It also has a dark red and black color scheme as opposed to the normal gray; the microfusion cells used as ammunition also follow the color scheme and appear red and black. This causes the cells to appear similar to electron charge packs.

Der Q-35 Materiemodulator can fire a total of about 1,245 times using standard cells, the equivalent of 104 reloads, from full condition before breaking. Despite being considered "unsuitable for prolonged field use," it has the second highest item HP of all the rifle type energy weapons (the laser RCW having the highest), at 250 HP; more than triple the durability of a standard plasma rifle (which has 75 HP). 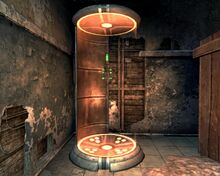 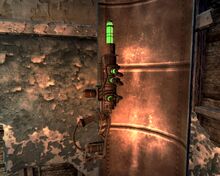