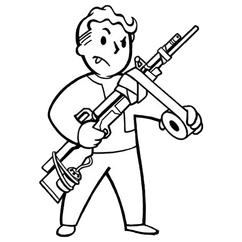 With this perk, you can Reparieren items based on category instead of type. For example, you can repair the rare Ranger Sequoia with the common .357 magnum revolver. The same goes for armor and clothing.

There are 13 categories of weapons that the perk will enable repairing within: unarmed, one-handed melee, two-handed melee, energy pistols, energy rifles (laser), energy rifles (other), energy weapons (heavy), one-handed guns, two-handed automatic guns, bolt/lever-action guns, miniguns, grenade launchers and missile launchers. Likewise, clothing can be used to repair each other within their category (light, medium, heavy). Finally, almost all headgear can be repaired with any other headgear.

Weapons are categorized, to some extent, by the method in which they are fired. For example, the bolt-action anti-materiel rifle cannot be repaired by a sniper rifle, because the sniper rifle is a semi-automatic firearm, but can be repaired by the hunting rifle. Some discrepancies arise with some other weapons, though. The 12.7mm SMG is categorized as a two-handed gun, and therefore can not be repaired by the 9mm and 10mm SMGs, since they are one-handed guns. A mostly complete list of all weapons that fall into specific categories follows.

A simple way to tell what weapons can repair each other is to look at the way that the player holds the weapon, in addition to the general type of the weapon (Guns, Energy, Explosives, etc.). For example, since the player holds the plasma rifle in the same way that they hold the laser RCW, Jury Rigging lets you repair them with each other, even though one is laser and one is plasma. However, since the laser rifle is held differently (more like a bolt/lever action gun), you cannot use it to repair the laser RCW, nor vice versa.

This perk is useful in that it not only reduces the need to effect repairs by using Reparatursatzs or non-player characters, but it also allows the player to reliably repair their weapons with similar, much cheaper ones from fallen foes after or during combat without having to seek out an exact match. Characters who use low-durability weapons, picked the Built to Destroy trait, or find themselves using surplus or over/max-charged ammunition often will reap great benefits from the perk. It can also be a big help to those who favor certain unique weapons like the YCS/186 or Oh, Baby!, whose normal repair counterparts are rare or expensive, or weapons that do not have a standard repair counterpart. This goes for armor, as well, meaning that even Remnants power armor can be maintained on the cheap with a set of metal armor.

Each weapon and armor falls under a specific category in which all weapons/armors repair each other.

Weapons are listed by their base variants, except in cases when it is unique. Make sure if you add something it is listed alphabetically.

Note: The laser rifle can also be used to repair the recharger rifle.

These weapons each are in their own category and can only be repaired by copies of themselves, their unique variants and using Reparatursatzs.

All head items in the base game, Dead Money, Honest Hearts and Old World Blues can repair one another due to all items being classified as "light".

The Riot Gear Helmet and its variants are the only headgear classified as 'Heavy' so far. Since they can already repair one another freely, Jury Rigging only has the effect to allow them to be repaired by heavy armor. The other helmets and masks from Lonesome Road are classified as 'Light' and can be Jury Rigged with any other headgear.