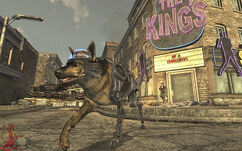 Talk to The King in die Schule der Verkörperung des Kings in Freeside. Ask him about Rex and he will tell you that something is wrong with him. He will then ask you to go to Julie Farkas, located in Old Mormon Fort. She will tell you that there is a man (Dr. Henry, in Jacobstown) who can help. You must then tell King that Rex can be fixed. He will allow you to take Rex to Dr. Henry, who will tell you to to find at least one dog brain to fix Rex. There are three possible brains to choose from:

It should be noted that you can only choose one.

That will fix the issue.
This can also be used in comparison with the resetquest trick above. If you do a resetquest 001176B8, you'll then have to pick up the quest from King and do setstage 001176B8 30. Follow the quest through as normal then, and once the quest is over, do the command above.
If you're having any other problems, try this command: set "0010d8df".ReceivedTransplant to 1