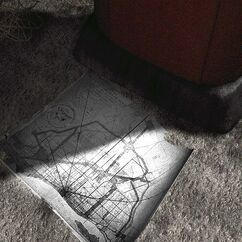 Before the War, Navarro served as a Poseidon Oil refinery for the Oil Rig, where the Enclave headquarters is located. Adjacent to the oil installations, a government-funded military base was constructed, together with a satellite up-link station, as well as maintenance and repair facilities.

Decades after the Großer Krieg, the base was commandeered by the Enclave, who converted it into their primary mainland outpost, establishing a refueling station for their Vertibirds. Due to the relatively short range of the Vertibird, as well as frequent malfunctions, especially in post-War conditions, Vertibird schematics were almost always present on site for necessary repairs and maintenance, but were prone to misplacement. Four were initially ordered, yet by 2241, three had already gone missing.

Some time in Navarro Dr. Henry and Dr. Schreber worked together, but they had different theories about the mutation in the Wasteland population. Henry was arguing with Schreber about the mutation problem once again when Schreber, in a fit of anger, told Henry he was going to recommend that Henry be transferred to another Enclave facility where he would be put to work on cybernetic maintenance. Henry took the threat very seriously, and within hours stole a cybernetic dog and slipped away from the Navarro facility. The Enclave, while not pleased with his attitude and the directions of his research, were not happy with his escape, as they needed all of their available scientists, as a result, several soldiers from Navarro were punished for negligence.[1]

In 2241 Navarro is relatively new and not fully staffed as of yet.[2] When the Enclave was preparing to use the FEV, many replacements were coming to Navarro from other smaller instalations.[3] Chris is supposed to clear many of the new soldiers. [4] At this time the Chosen One visited the base pretending to be a new recruit, who was sent here to assist in the staffing issue. Drill sergeant once caught him without his uniform.[5] The Chosen One killed Schreber, freed Xarn[1] and repaired motivator K-9 and took him to Shady Sands.[1] He also stole the Tanker FOB from the Base Commander's locker,[6] and used it to pilot the tanker and destroy the Oil Rig.

Sometime after the destruction of the Oil Rig, Autumn Senior led the majority of Enclave forces east.[7] Some years after that, as part of the NCR-Enclave War, Navarro was assaulted by NCR forces in order to remove remnants of the Enclave from NCR territory. The NCR won the battle and the Enclave forces scattered[8]. Navarro was sacked, and the advanced technology left behind by the Enclave was recovered by the NCR, but it was too advanced in origin and makeup for them to understand. However, they noticed that the symbols found upon the technology (American flag, silo stencils, etc.) were identical to those that had been recovered at the Divide so a tie between the two was suspected. The NCR hired a Courier to take the item from Navarro to the Divide.[9]

Its loss was evidently unknown to the Enclave contingency on the East Coast, as ED-E's creator Whitley makes reference to "Navarro scientists" in his audio-logs, under the assumption that they will continue his development of the duraframe model eyebots. One of the Fallout: New Vegas endings for ED-E in which its memory is not wiped will show it traveling to Navarro and vanish; ultimately leaving both its fate, and the current state of Navarro unknown. If you rescue ED-E's clone in the Divide and choose to launch Ulysses' payload, it will continue its quest and eventually reach Navarro, however, it is never stated what the clone found or saw at Navarro.

The station acts as a checkpoint for the Enclave's military base, Navarro - the sentry's role is to turn away any undesirables and receive replacement recruits from other mainland bases. He is supposed to clear them and direct through the minefield in the forest next to the station.

The underground areas of the base contain the base's armory, mainframe, commander's office and the soundproofed science lab, operated by Dr. Schreber, participating in the deathclaw intelligence enhancement project.

"I remember that once we put all of the locations on the world map that we moved some of them around a bit to create a more even spacing of adventure locations. I don't remember if we moved the Enclave's mainland base for this reason, but it's possible."

The real-world Colusa is much farther east and a little south of Navarro.

Maintenance building, where the Chosen One can get the vertibird plans
Füge ein Bild zu dieser Galerie hinzu