Ripper (ehemals)
Children of the Cathedral

Outwardly, Morpheus is the supreme leader of the Children of the Cathedral. Though he adopts a pious demeanor and can sound a bit like an old-time country preacher, he does not believe that the Holy Flame, the Dark Lord, the Master is, in fact, God. Morpheus is intelligent, crafty, sly, greasy, and thoroughly evil, Ensnared by the promise of power rather than by belief, He has a short fuse and a terrible anger, which makes him an extremely dangerous individual.[1]

Morpheus used to be a member of the Ripper, a gang of inbreds familiar to him, but he eventually left the gang and became the leader of a doomsday cult. In 2151, he was found by the Master's spies and pledged his followers to him, forming the future core of the Children.

Morpheus lives in the Cathedral, on the tower's highest floor. It is here that he oversees the immediate goals of the Children and holds their Communion by means of large, propaganda-esque monitors located on the main floor. He died in 2162 by the Vault Dweller's hand, either in person, or as the Cathedral was destroyed. 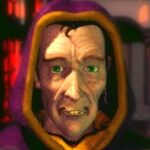