The wreckage of the destruction caused by the nuclear warheads launched at the end of The Apocalypse, the area is populated with irradiated heavy troopers and Glowing trooper ghoul, along with their former commanding officer; Colonel Royez, who is also in a ghoulified state. The camp consists of a small firing range, numerous ruined buildings, and several crashed Vertibirds, along with a small amount of high tech gun cases along the road to the northwest. Ammunition boxes and NCR weapons are littered around the area. A dead NCR heavy trooper is sprawled on top of a Military shipping crate left of where Royez is located. 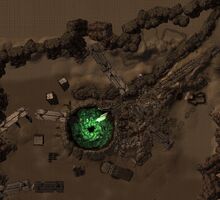 Sometimes with Rex as a companion, when going around the slanted road, he will go outside the map and will be irretrievable. This can also happen to Veronica Santangelo as a companion on PC. This can be fixed by going into the dismissal terminal, either at the Gun Runners or the Lucky 38, and dismissing all companions, and then retrieving them again later. Fast travelling may also work.[überprüft]