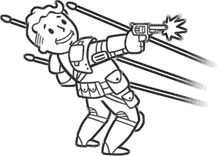 To calculate the overall critical chance, multiply your base critical chance by the weapon's critical multiplier and ADD a flat bonus of 5% granted by Light Touch (as well as another 5% bonus granted by V.A.T.S. if you are using V.A.T.S.).