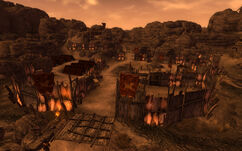 At the entrance of the camp there are a few Praetorian guards. One is standing directly in front of the hill and two are in the small encampment to the left. On the right side of the entrance to the camp there is a cage with Legion mongrels. The cage door can be sabotaged so it won't open, but the dogs inside can still be attacked.

Up the hill, you will see Legate Lanius. Approaching him will initiate conversation. On top of the hill stands the Legate's War Tent. As the tent is locked from the inside, (which is quite odd considering it's a tent), there is no normal means of entry. Inside the tent, during the Veni, Vidi, Vici quest, you will find him with a Praetorian Guard on the right and a slave sitting on the left. The Legate is torturing and mutilating RNK prisoners, as you can see from the bodies on the table and floor.