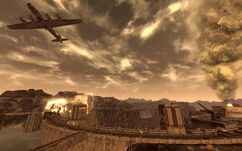 After completing Es geschah am hellichten Tag, at the very moment you choose to side with the NCR for the final battle (thus completing For the Republic, Part 2), you'll be automatically taken from Col. Moore's office to General Oliver's Compound, where the General will begin briefing you. The player is given the chance to wait, as this begins the end quest for the game. If the player chooses to continue, after the briefing, Legion members attack the Hoover Dam and you have to fight your way through the power plant rooms and head towards their base east. You will start in Power Plant 04.

Completing this will require manual intervention; return to Power Plant 04 by the closest door which is right below the console. On the east wall, on your left as you re-enter the area, there is an exit to the Dam exterior. The manual release valve you need to complete this part of the quest is along the river to your left between the broken retainer wall, just after the second sandbag wall. Return to Power Plant 03.

Proceed to Power Plant 02, then Power Plant 01, dispatching Legion troops on your way. Climb the stairs on your left in Power Plant 01, then proceed north along the balcony. Follow the passage along the left, then go up the stairs, and exit via the elevator to the Hoover Dam visitor's center. At this point, you will begin to notice assistance appearing from companions and factions you have helped out along the way. Exit via the double doors on the east side to Hoover Dam.

Proceed to the north along the curved walkway above the dam. There is a door hidden in the side of the dam that you can pick with a lockpick skill of 75 (hard). Enter the Hoover Dam checkpoint. From here, you can check the terminal; if you have a science skill of 100 and a detonator, you may use the terminal to detonate one group of legions (the blast is centered near the first tower). When you exit on the other side. An NCR Veteran Ranger will thank you for your support, asking how to coordinate their assistance. The player can respond with several dialogue choices:

After crossing the dam, head left along the bridge to the east, and continue, following the road. Enter the gate to the Legate's Camp. Head east into the camp, following the path up the side of the ridge. There, you will encounter Legate Lanius. Note that With a Speech or Barter skill of 100, you can pass a series of skill checks, and avoid fighting him. The Legate is extremely challenging, and many Legionaries will come out and attack you. If you pass all of the previous speech checks and fail the last one, you get another Speech challenge [85] which can convince the Legate to fight you one on one - all the other Legion troops will become friendly to you.

After either killing the Legate, or passing a series of speech checks to end the fight peacefully, you should notice the gate to the camp has closed. Head back to it. The gate will explode and you will meet with General Oliver.