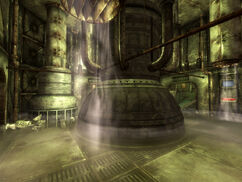 Before proceeding to Vault 34 it is wise to make adequate preparations. The Vault is saturated with radiation; large amounts of Rad-X and RadAway will be necessary. There is an Average locked safe with about a dozen Rad-X and RadAway inside the vault clinic. Note that you will frequently be taking a minimum of +1 RAD/sec even with high radiation resistance as Rad Resistance is capped at 85%.

The Vault is full of feral ghouls with high health and strong melee, and the corridors are badly constricted. Some areas are underwater. High DT armor, preferably with Rad Resist, is strongly recommended.

Head east towards the Vault 34 map marker. Right before the main cave entrance lies a truck with many radioactive barrels surrounded by a group of golden geckos.

The Vault 34 cave has two entrances - the second is at the summit of the bluffs. Unlike most cave entrances, the summit entrance is situated vertically, slightly recessed into the rockface. This entrance is labelled simply as "Enter Cave". This short, circuitous cave has a few golden geckos and minor loot. Deep within the cave lies Vault 34's open Vault door. The Vault population has been transformed into Wilde Ghuls, and the security officers have become Leuchtende.

Vault 34 had severe problems with overpopulation, compounded by an overstocked armory. To access (and loot) the armory, the Vault 34 security terminal, the Vault 34 utility terminal, and the Overseer's terminal must be accessed. If you have insufficient Science skill to hack the Very Hard terminals, the first two passwords can be found on glowing one corpses (Vault technicians) that lay underwater, trapped beneath desks, in two separate but nearby locations. Both locations have stairs that go down into radioactive water, and each location is marked with a stream of water falling from the ceiling. Neither location needs to be drained to loot the glowing one technicians for the passwords (security terminal password and utility terminal password). The rebreather is very useful here.

The overseer's door is unlocked through the terminal in the security room. To access the security room, activate the terminal in the Utility Room, located next to the entrance to the armory, and select Activate Pump to drain the flooded level. The clinic (first door before the Overseer's room) has an Average wall safe containing eleven Rad-X and eight RadAway. You will need these supplies as there is a lot of radiation in the next rooms. Exiting the Utility Room, the Security Room lies to the right; this door is underwater and inaccessible until the pump is activated. Past this door lies the terminal to unlock the overseer's room.

The Overseer is a boss-type creature, with very high health. As soon as the door to his room is opened, the Overseer will engage, together with two Vault-Tec turrets in his room. The door to the small corridor leading up to the Overseer's Office will close momentarily. At least two hostile ghouls will spawn behind it and engage the player from behind. Space is very tight and companions will likely obstruct the player's maneuverability. The Overseer's pathing sometimes gets caught momentarily on his platform, affording the player a few seconds to unload freely. Note that like all turrets, the Vault-Tec turrets explode when destroyed; they should be the player's first target as they do a great deal of damage across their field of fire encompassing the entire room, and the explosion from destroying them will also damage the Overseer.

The terminal at the back of the Overseer's Office accepts the password he drops to unlock the armory door. The armory has lots of useful equipment. Several suits of Vault 34 security armor and helmets, a Kampfmesser, 10-mm-Pistole, many 10mm SMG, a sniper rifle, an assault carbine, the All-American, a Marksman carbine, a minigun, a riot shotgun, a missile launcher, missiles, 2 grenade launchers, a few C-4 plastic explosives, and the pulse gun (inside a very hard locked chest, can be opened with a key found in Pearl's barracks).

Descend beneath the Overseer's desk to the Reactor room. Past the dripping corridors, there is a room with half-flooded stairs. In the back, to the left of the stairs, there is a large, red-and-gray mainframe terminal. The terminal gives some vague information about opening a reactor door, closing the exterior vents and rerouting vault control. Reading the SOS message makes the alternative quest ending available as well as starting the quest if you have skipped the above steps.

Open the reactor door - it is just to the left of the terminal that unlocks it. There are two vault technicians transformed into glowing ones in the room. Kill them and access the computer terminal in the room (key to unlock this terminal can be found at overseers body). It presents the final choice as to how to end the quest.

Human vault dwellers are trapped in the (unreachable) underwater side of the vault. Either disable the reactor, removing the radiation contaminating the NCR Sharecropper Farms, or reroute control of the computer system to the Vault dwellers. Enter the command first through the terminal in the reactor room, then backtrack to the mainframe terminal in the previous room to confirm the command. After one of two resolutions is chosen, no further commands can be entered through the terminal.

The rescued Vault 34 dwellers, led by Horowitz, will travel to the Aerotech Office Park east of Camp McCarran, taking up residence at Suite 300. It takes them about a day or two to make their way there after being freed by the player. Dialogue with Horowitz offers the option to request a "Vault Trinket" but normally no item is added to the player's inventory. Occasionally a food sanitizer may be added to the player's inventory when this option is selected.

"Harte-Zeiten-Blues" is a blues song first recorded in 1950 by blues/soul artist Roy Brown, for whom it achieved a No.1 on the R&B chart. The lyrics speak of a vagrant with a life very similar to that of the Lone Wanderer.