Evergreen Mills bazaar is a cave complex with a bar, shop and a brothel accessed through a hole in the floor. Apart from the non-hostile Smiling Jack, 10 heavily armed raiders, with at least one carrying a missile launcher, populate the area.

Just inside the door leading from the foundry is a room with most of the floor gone. It is possible to climb down this hole and follow a tunnel to the main portion of the bazaar. Arranged around a central stone pillar are wooden platforms connected by a series of ramps. A passage in the Northwest corner of this central area, flanked by a pair of mannequins decorated with red lights, leads up to a raider brothel where you will be greeted with hostility by Madame (who is unnamed in the game). A few raider women (the brothel's whores), can be found locked in cells. Upon release, these women will attack the player.

On the right-hand side of the cave is the shop of Smiling Jack (the only non-hostile raider in the area), which is in a small cave reached from the main portion of the bazaar. There is a workbench in the northeast alcove of his store. A small safe is built into the back of the counter under the workbench. Behind the workbench are some shelves containing some miscellaneous items and the Bobblehead - Barter on the right. There is a hidden space behind the shelves on your right (when you walk in) containing two ammunition boxes and some chems. To get there, just turn right and go between the two sets of shelves. Killing Smiling Jack allows the Lone Wanderer take his unique weapon, The Terrible Shotgun, and his key, gaining access to the inventory of his shop without losing Karma. He will also have a finger on his corpse if with the Lawbringer perk. It is possible to reverse-pickpocket another weapon with appropriate ammunition and take all of his shotgun ammunition. If you leave then return to the Bazaar, he will have equipped himself with the new weapon, putting The Terrible Shotgun in his inventory. It is also possible to shoot the gun out of his hand, and pick it up with a low Sneak skill (he goes hostile but doesn't engage in combat). 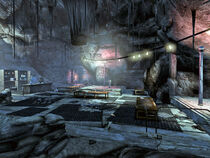 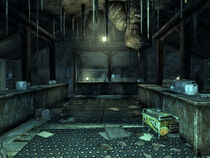 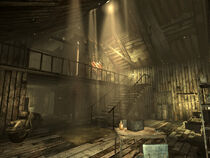 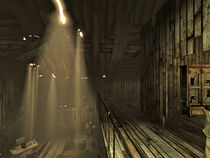 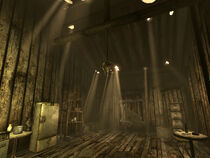 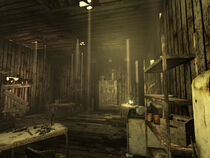 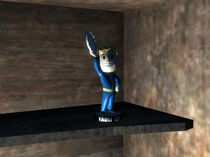