Ein Retter in der Not

Ein Retter in der Not 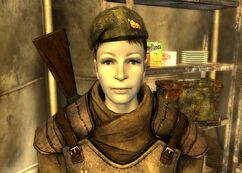 The supplies Captain Gilles needs were stored near Bitter Springs by the camp's former occupants.

Getting additional troops assigned to Bitter Springs will require you to travel to three NCR camps in the Mojave; Camp Golf, Camp McCarran, and Camp Forlorn Hope. These camps each have their own problems, and you may have to give them assistance before they can agree to your requests for support.