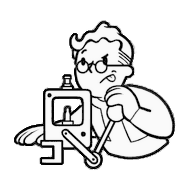 This perk allows you to craft 6 more types of ammunition at a reloading bench (plus 1 more with the Honest Hearts add-on, and another 6 with the Gun Runners' Arsenal add-on), each requiring slightly more supplies to create than the standard form. The perk also doubles the chance of recovering a shell/casing whenever you fire off most rounds. With Gun Runners' Arsenal installed, it also adds a more efficient recipe for making powder charges. This perk is favorable for players who prefer saving cartridges and casings and making their own at a reloading bench rather than spend the caps to get them from a vendor, and those who prefer the Guns skill over most other weapon skills. This saves money and when utilized to its full potential, can prove to be a very lethal proposition when choosing this perk.