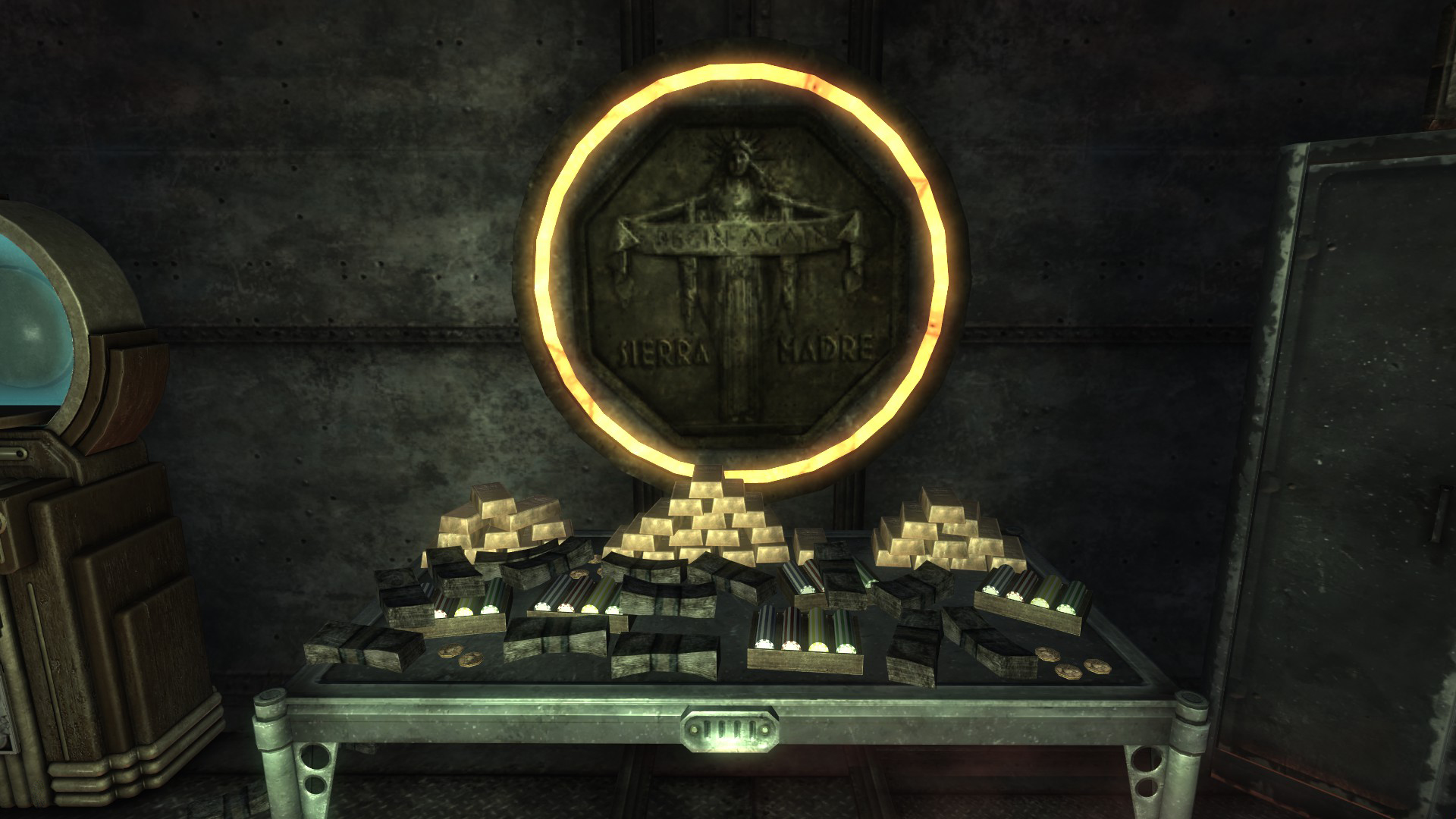 To begin the quest, the speaker next to the elevator in Vera Keyes' suite must hear the password in Vera's voice. You can take the holotape of Vera's audition, go down to the front computer in the main lobby, collect all three music varieties, and return to the elevator in Vera Keyes' suite. Play the music into the speaker, and the elevator can now be taken to the lower level. Alternatively, if you have not killed Christine, she will say the password using her new vocal cords after recovering the music from the lobby computer.

The Courier must navigate a maze of ducts and catwalks filled with security holograms, toxic clouds and many shielded speakers. In some situations, the Courier may have to trigger hologram monitors to clear a path. Once you pass through the two initial vault doors, on your right is a terminal next to another vault door. Enter the duct maze by using vault maintenance access terminal to open the maintenance access. There's a speaker nearby. Follow the passageway around to the first room. Entering the first chamber, the speaker is immediately in front of you. Halfway down the chamber you enter the range of another speaker. Jump down the broken walkway and then to the right to enter the shelter. There is a safe spot in front of the table in the enclosure with the worker's note complaining about safety and Sinclair's ignorance of the vault issues. There are two ammunition boxes next to the note on the shelf. Continue through the passageway to your left.

Follow the passageway around and into another shelter area. In the next room are four speakers, two of them unshielded. Turn right as you enter the room and run to a safe spot in the corner. Directly behind you above the door you came through is an unshielded speaker. Slightly to the right and up high above a doorway is the second unshielded speaker. Destroy both of the unshielded speakers.

A third, shielded speaker is high on the wall just a bit further along the catwalk. If you holster your gun you'll have barely enough time to run down the left side of the upper walkway and reaching the terminal to override the alarms. Continue through the corridor.

Note: On the right broken section of the top walkway you can actually jump onto the beam and then onto the section with the exit. If your timing is good then this is an easier way to get through than to follow the left path.

The next room adds security holograms to the gauntlet. The hologram control computer is in a workers' hut to the left of the entrance to this area across a walkway with a gap in it. There are 3 hologram emitters in this room, although they require a Reparieren skill of 100 to disable, you can shoot them. The first is on top of the enclosed structure to the left (when entering the room). You can push a barrel onto the catwalk to the left, jumping on it and jumping in the air while on the barrel will allow you to shoot the emitter on the roof of the first structure (oddly enough, after you move said barrel, it will disappear and become visible again after you touch it and will repeat in this way), alternatively this can be achieved by exiting the room towards the gap in the walkway you came from, hopping onto the rail and attempting a jump shot into the emitter, this will make the holograms hostile so run. The second is on top of the metal beam almost directly on top of the door with the force field. You will need to run along a beam and jump up onto the roof of the structure in the southeast corner of the map to reach these. The third is on the ceiling (not the roof like the 1st, but inside) of the control structure in the northeast corner of the map. You can also use 2 or 3 carefully tossed hand grenades to blow up the emitters without having to get close to the holograms or the speakers (you can get up to 9 frag grenades from the grenade bouquets that Dean set up around him from where you met him, so long as you can pass the Explosives check (30) to disarm them). After dispatching the three hologram emitters, you can turn off the security system at the last terminal.

After the room is quiet, drop down to the lower catwalk in the poison gas and grab the Vault Turret Terminal Password tape. Activate the vault security turret terminal password as this shuts down the last set of force fields and speakers.

After entering the hall past the force fields, there is the Vault Security terminal which can be used to shut down the remaining security.

Immediately before entering the vault is a toolbox and next to it, a holotape containing a venomous message to Vera Keyes. A skeleton lies on a pipe beneath it - Sinclair's - and the duffle bag next to it contains a copy of Nikola Tesla and You.

Inside the vault itself is an assortment of weapons, armor, chems, money, chips... and the fabled Treasure of the Sierra Madre: 37 Goldbarren worth 10,539 caps each, for a total of 389,943 caps and the single greatest collection of wealth in the Mojave-Ödland - each of which weighs 35 pounds, for a total of 1,295 pounds. There are also over 2000 .357 magnum rounds inside a gun cabinet (not a fixed number, it's dependent on Glück and whether the player has Scrounger), as well as some Sierra Madre armor, reinforced.

However, the vault door seals within seconds of entrance. Lift the lockdown using the left security terminal, then use the monitor in the back to look up the word 'Vera'. This reveals that Sinclair in fact designed the Sierra Madre Vault not to protect valuables, but a small number of people as per a Vault-Tec Vault through the Great War: namely himself and Vera Keyes. Learning that Dean Domino planned to rob the Sierra Madre with Vera's help changed these plans. Sinclair left a warning for Vera, and a trap for Domino: a file marked "Sinclair's Personal Accounts", the reading of which activates a system which permanently seals the vault.

If the player chooses to access Sinclair's personal accounts, the game will end in with a slideshow cutscene, stating how the courier was trapped in the casino vault, eventually dying inside. The game will then load the autosave created before accessing the terminal inside the vault.

After the Courier reads the Vera entries, (and without reading the personal accounts closes the terminal), Elijah will make contact. Skills of 75+ in Science, Repair, Sneak, Explosives, Barter or Lockpick can be used to persuade Elijah to enter the vault to confront the Courier personally. If your reputation with the RNK is low enough, you can ally with Elijah during this conversation. He regrets putting the collar on a potential ally, and comes down to the vault. But the end slideshow starts early, detailing how you and Elijah conquer the Mojave with an army of holograms and generate a second Cloud over Hoover Dam, ensuring nobody gets the power. Unfortunately this results in another nonstandard game over.

After leaving the vault control terminal, Father Elijah will contact you on a green screen behind the terminal and you're given the opportunity to further question Elijah's methods and motives. When the topic of Elijah coming down to the vault arises, the following dialog options and skill checks (75+) are available:

With any of the first three options, (he's persuaded or coerced into approaching the vault), he will arrive via the elevator, deactivate the forcefields and walk directly to the vault door. You have two options: confront Elijah and kill him, or Sneak away from the vault and make your escape to the elevator.

Hacking the security terminal (Science 100) in the vault will cause the turrets outside to turn on Elijah and if they kill him, the player will not receive the Cash Out achievement/trophy. Destroying the turret generator (Melee or Unarmed 50) next to the terminal will disable the security turrets and cause Elijah to become hostile when he gets to the vault door.

Elijah is immune to damage as he approaches the vault, up until combat is initiated and he reactivates the forcefield barriers blocking access to the elevator. He becomes instantly aware if the Courier steps near either of the two forcefield barriers nearest the elevator, even if the Courier is Hidden, has 100 Sneak, and is using a Stealth Boy. Also, Elijah can pass through the forcefield even if it is active, before or during the fight.

In order to sneak past Elijah and seal him in the vault, resulting in the Safety Deposit Box achievement, simply leave the vault when Elijah comes down and remain Hidden outside the blue forcefield barriers. If you remain within the confines of the turret room barriers, whether Hidden or not, Elijah eventually activates security, turning the turrets on and sealing you in while you fight. It is best to leave the immediate area (and get a head start) by running back through the duct maze (to the left, or east) as fast as possible; fast enough and the door near the elevator may still be script-locked (requiring non-existent key) until Elijah makes his last mistake. It is also highly recommended that all the holograms are disabled before attempting this to allow for an easier escape. Elijah will access the vault's exterior terminal, triggering the trap Sinclair had meant for Dean and sealing himself in.

Once Elijah is killed, or he realizes he's been tricked, the entire vault level begins to fall apart and your explosive collar is activated; it will detonate within a minute unless the Courier boards the elevator to the surface.

Reach the elevator in time, and the Courier appears at the fountain in the Villa. The Courier can then revisit any location in the Sierra Madre. The explosive collar will have been automatically removed upon arrival in the Villa, which makes navigating the outlying areas much, much easier and allows exploration of previously unavailable locations.

Once the Courier exits the front gates of the villa, a slide show plays detailing the fates of his three fellow captives, ending with the Courier deposited at the Abandoned BoS Bunker, unable to return to the Sierra Madre (except if you use PC console commands, finding a steel "Door to Villa"). The radio plays a last broadcast from Vera Keyes (or Christine?), bidding you farewell and reflecting on the real meaning Sinclair intended for the Sierra Madre casino. Your original equipment will be returned as you walk up the stairs to leave the Abandoned BoS Bunker.