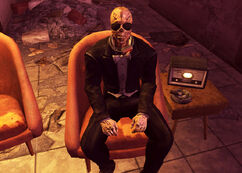 Domino and his orchestra gave performances across the United States and Europe, including the casinos on the Las Vegas Strip. He was invited to play at the Sierra Madre, but found himself in the shadow of the casino's founder, Frederick Sinclair. Domino, consumed by jealousy, became determined to take everything from Sinclair that he held dear. He enlisted the help of his former lover Vera Keyes, a starlet who had caught Sinclair's eye. Domino introduced them to each other as part of his plan to break into the casino vault, where he would take whatever it was that Sinclair had there that was so important. However, Keyes got cold feet, so in order to ensure her continued cooperation, Domino began to blackmail her with evidence of a Med-X addiction, apparently unaware that her addiction was a result of her being terminally ill. His final gig was to be at The Tampico, but that all changed when the bombs dropped; the security holograms activated and the Gala Event turned into a massacre.

Domino survived the apocalypse and the casino's security systems, but refused to let go of the Sierra Madre's treasure, becoming obsessed with it. He would spend the next two hundred years plotting his grand heist, oblivious to the fact that Sinclair had long since discovered Domino's plan and prepared a trap within the casino vault. However, he was captured by Dog, fitted with an explosive collar, and forced to work for Father Elijah in breaking into the casino. Although his ability to obtain the treasure may have diminished with this development, his lust for it most certainly has not.

He is a quick thinker, trained with guns (specifically pistols), explosives, and knives. He is very paranoid, setting up many booby traps and hiding several 'secret stashes' throughout the Villa - perhaps understandably, considering the ghost people who inhabit it. He is also overly obsessed with robbing the Sierra Madre in revenge for the perceived insult from Sinclair, who he believes built the casino just to overshadow him.

Dean finally found an opportunity when Christine Royce appears. Christine tracked Elijah from Big MT to the Sierra Madre Casino, where she suffered the same fate as Domino. At some point, Domino locked her into an Auto-Doc in the Villa's Medical District, where her vocal cords were torn out. She later regains use of her voice when the operation is completed by the Auto-Doc in Vera Keyes' hotel room, where it is revealed that her capture was part of Domino's plan to break into the vault, as the elevator could only be activated by the voice of the long-dead Vera Keyes.

Dean Domino is mentioned in Fallout: New Vegas and Lonesome Road, and appears only in the Add-On Dead Money.

Zoomed in headshot from poster