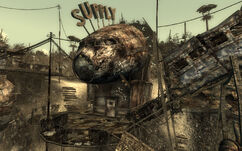 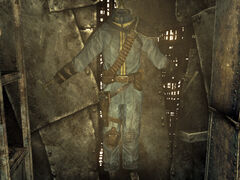 The armored Vault 101 jumpsuit behind the counter.

Der Craterside-Lagerraum ist ein Geschäft, das sich in Megaton in Fallout 3 befindet. It can be found by going right and following the path as soon as you enter Megaton. Das Geschäft öffnet um 8 Uhr morgens, und dessen Besitzer Moira Brown's Inventar, als auch ihre Kronkorken, aktualisieren sich Montags und Donnerstags. The shop sells anything one might need, and as most of the Megaton settlers point out, usually at a good price. Speaking with Moira will grant the option of buying items, oder die Ödland-Überlebenshandbuch Quest zu starten.

Craterside Supply is guarded by a single mercenary who upon interaction replies he is "watching [the visitor]", although during her quest he might say to "leave him out of that girl's crazy experiments as he does not get paid enough for that," referring to the help the Lone Wanderer is giving Moira. Any negative interaction with Moira, such as getting caught stealing or injuring her, will lead to the mercenary turning hostile and retaliating.

By 2297, the store lives on under Moira's ownership, and is the hub of the Wasteland Survival Guide distribution network.[1]

On the right upon entry, the counter is just beyond the entrance, with an armored Vault 101 jumpsuit behind it and a locker that contains some of Moira's inventory, but it cannot be picked. Moira's terminal (very easy hack) is directly to the left which contains information on Moira's other experiments. Near that is another fully stocked locker which can also only be opened with Moira's key. On another side, the mercenary stands with his back against the wall alongside a workbench and a doorway. Walking through the doorway leads to the stairway and the bed owned by the mercenary. 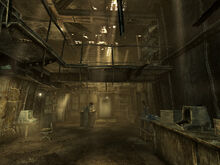 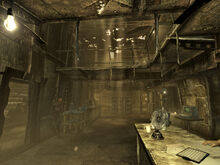 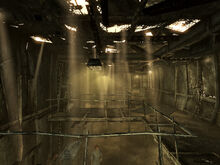