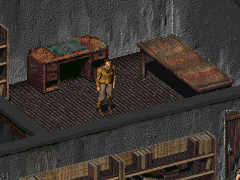 Butch Harris may be the leader of one of the Hub's big three caravans in name, but in fact, he's a figurehead. Butch has big dreams, but he's bitter and frustrated and also something of a coward. When Butch thinks he's on top of things, he swaggers a bit, and exhibits cocky and boisterous self confidence. When things go wrong, though, he tends to lose control, talking loud and fast and not getting much done. All the real organizational and administrative work for the caravans is done by Rutger, his assistant. Butch is not that intelligent, and recent events have left him a bit paranoid. The Far Go traders have been having more than their fair share of hits from the mysterious force attacking the Hub's caravans.[1]

Before running the Far Go Traders in the Hub, Butch has lived in San Diego (some times before the sickness start and the exodus of all inhabitants) and after, he comes in the Adytum of the Boneyard. In 2156, Butch made his way to the Hub and acquired the Far Go Traders, one of the three most important caravan companies of the Hub.[2]

He is a rather grumpy sort, probably due to many years of stress in his years of management. Butch thinks that he is the sheriff around the Hub, and will ask you to give information to him, rather than Sheriff Greene. He is an old acquaintance of Elder John Maxson, though the two haven't seen each other in a while.

Starting a while before 2161, strange disappearances involving many of Butch's caravans left him on edge, and eager to discover the possible killer. Out of irrational fear, he turned to blame the fabled deathclaw as the source of the disappearances.