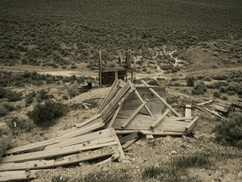 Broken Hills war einer Bergbaustadt im westlichen Teil von dem Vorkriegsstaat von Nevada. After the war of 2077, it became a haven, inhabited by humans, Supermutanten und Ghulen, living together in relative harmony (or so it seemed).

Shortly after the Master's defeat, super mutant Marcus wandered aimlessly until he encountered Jacob, a Stählerne Bruderschaft paladin in power armor who had pledged himself to the extermination of all mutants. Marcus and Jacob fought for a day or two, but they soon realized the futility of their battle and became friends (though Marcus always thought that Jacob would have been improved by a dip in the FEV vats, while Jacob disagreed, this was always a point of contention between the two). As they wandered through the wastes, they attracted a small following of refugees from the war. The refugees believed that Marcus's strength and Jacob's power armor offered them a certain level of protection from the hazardous wasteland. Eventually, Marcus and Jacob led the refugees to settle in Broken Hills to exploit the uranium mine there.

Broken Hills provides all the uranium that Vault City and Gecko need for their atomic power plants. The radiation-resistant ghouls and mutants that live and work in Broken Hills make ideal uranium miners since they're in little danger from the radiation exposure miners face here. Unfortunately, since Vault City will deal only with humans, the miners must use human traders as their intermediaries. These human salesmen charge the miners an exorbitant commission for their work. Tensions in this multiracial community have risen to a fever pitch because the human merchants have been accused of outright theft of the fruits of the miners' hard-earned labor.[1]

With the destruction of the conspiracy to destroy the mutants, Broken Hills began to thrive. Then the uranium ran out. The city, having lost its sole reason for existing, slowly dispersed. The residents carried their riches with them, leaving the place a wind-swept, desolate ghost town. A few hold-outs remained, attempting to eke out a pathetic existence, but eventually, they too, disappeared.

The Broken Hills uranium mine is worked by the town's super mutant population. The radiation in the mine has minimal effect on them and their great strength aids in the physically taxing labor. The mine does require an air purifier, however, as toxic gas build-up makes the mine inoperable unless it is regularly filtered. The town's life blood comes from the uranium mine. Broken Hills has its own operational refinery operated by ghouls. If you can purchase uranium ore from a caravan, the refinery will produce refined uranium for you. The town is powered by a small reactor that runs off of uranium slugs and produces ample power for the community. The uranium trade runs to the NCR and Vault City as well as trafficking brahmin Herds across the wastes. The uranium trade is so important to so many towns' existence that even Vault City will check their unrelenting bigotry for outsiders and mutants and trade valuable medical supplies and money for uranium ore. Ever since the mine's air purifier broke down, uranium production has halted, leading to an economic crisis in Broken Hills.

Random encounters in the Broken Hills area feature Unity Patrols of humans, ghouls, and mutants that are friendly to players with positive karma .