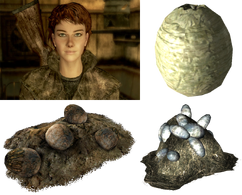 The first assignment is to acquire giant mantis eggs. Lucy marks Vault 22 on the map; if it's already been cleared, then the quest is easier to complete. The mantis eggs will only spawn after speaking to Red Lucy and initiating the quest. In order to get to the eggs on level three, the cave door keycard must be located in the common area. It is on a shelf in the first bedroom on the left after passing through the door labeled "Quarters" on the lower level, across the area from the door labeled "Utility". Also, 12 normal mantis eggs can be collected instead, which will turn into a pile of giant mantis eggs. After taking the eggs, they will need to be presented to Red Lucy back at The Thorn. She will reward the player with 200 caps or 300 with a barter of 50. Asking her what to do next will unlock the next part of the quest.

An alternate route to get to the eggs without having to get the key card is: Repair the elevator and take it down to the Pest Control level. Upon exiting the elevator, take the first left and go up the stairs, then take the door to Food Production in the room at the top. Go forward at the tunnel intersection; there will be a few mantises at the end of this path, guarding the giant mantis eggs.

The next part is to collect radscorpion eggs near Goodsprings Cemetery. There will be at least 4-6 radscorpions there, many of the giant variety. Collect the eggs created for this quest. Looking down from the hill that houses Goodsprings Cemetery, the egg clutch is practically due east, and can be seen through a long range scope. Just like before, after collecting the eggs, they must be brought to Red Lucy for 300 reward caps and a hunting rifle with some ammunition. Another barter challenge (60 Barter to pass) can be used to instead receive 400 caps.

Then, she will tell the Courier to go search the Ireteba Peaks for fire gecko eggs, specifically at the unmarked location, Bootjack Cavern. Fast travel to Clark Field (or run there from Novac), then go E/SE up the hill. Once inside the cave are approximately 10-14 fire geckos. A pile of fire gecko eggs can also be located in the cave. After receiving the eggs, take them back to Red Lucy for 500 caps, or 700 caps with a Barter check (70 to pass).

The searching gets tougher as your next challenge will be night stalker eggs in Bloodborne cave. After entering the cave, make a left and drop down to the lower level. Ahead is a camp fire surrounded by skeletons. The pile of night stalker eggs can be found just beyond that. Inside the cave are many night stalkers, including the Legendary night stalker. However, with the Animal Friend perk, they will not attack. After leaving return to Red Lucy. She gives a hunting revolver, some ammunition, and 700 caps (1000 caps if a Barter speech challenge of 80 is passed).

An alternate method is to obtain 12 night stalker eggs. After collecting the 12 eggs, the game will "convert" them into a "pile" of eggs like those found in the areas Red Lucy suggests to the player.

Next on the list, go to Nevada Highway 157 leading east from Jacobstown and follow the dirt path when it splits off directly in front of Silver Peak Mine. When coming towards the radio antenna, turn right and follow the route straight ahead and find cazador eggs. There will be a lot of Cazadors to deal with including adult and young. After taking the pile of cazador eggs, return to Red Lucy for more caps and for the final egg-collection task. She gives 1000 caps, or 1500 with a barter of 90.

Now is the final test, deathclaws. There are two options on this challenge: either go to Quarry Junction or to Dead Wind Cavern.