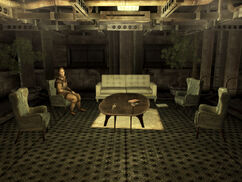 The offices are on two levels, spread out around a single east to west corridor. There are several entry and exit points. The usual entry is from the visitor center by way of a short walk through the top tier of the Hoover Dam Power Plant 01.