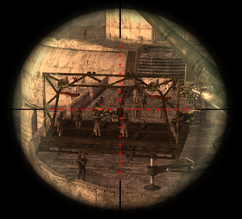 After receiving instructions from Caesar (or Lucius, if Caesar is dead), the player needs to meet Cato Hostilius, camped northwest of Ranger station Delta. When spoken to, he will present the player with a set of NCR armor and suggest planting a bomb on the Bear Force One (the player can receive such a bomb from him if their Sprengstoff skill is at least 50). Afterwards, he will make his way to Hoover Dam and blend into the crowd of spectators.

The entire area of the Dam is heavily guarded by combined patrols of NCR regulars and Rangers. The latter can see through faction disguises, the NCR will always be hostile when the disguise fails due to the failure of Don't Tread on the Bear!. The player has a limited time to make some preparations before talking to Cato again in the crowd and telling him that they are ready. Waiting for too long (well over an hour of real time), leaving the location before completing the assassination, killing any ranger atop or in the immediate area of the visitor center (even quietly, this includes the trooper Jensen) or not arriving at the dam at all will fail the quest.

Immediately after Cato is told that the player's ready, the Bear Force One will arrive and land on top of the visitor center. President Kimball will make his way to the stage to deliver a speech. If there is any suspicion that an assassination attempt is imminent, the Rangers will interrupt and hurry the President back to the Vertibird or a secured location beneath the helipad if the aircraft is inoperable. Otherwise, after the speech ends, the President and his security detail will simply leave.

Note: Drawing a weapon while near the visitor center and after the president has arrived will result in the President and NCR reacting as if he had come under attack, even if the Courier is hidden and has not attacked. However the NCR will not turn hostile unless they see through the Courier's disguise.

Any method that involves destroying the vertibird with Kimball aboard, employs explosives or high impact projectiles (Gauss rifles for example) runs the risk of making President Kimball's suit and the Meat of Champions perk unobtainable due to the inaccessible or lost corpse.