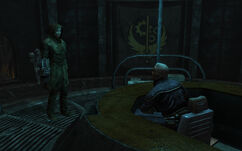 This quest is triggered by Veronica seeing things around the Mojave that cause her to question the wisdom of the Stählerne Bruderschaft remaining hidden underground and not interacting with the world. There are nine triggered conversations throughout the Mojave Wasteland that Veronica will initiate in response to nine different situations she and the Courier may encounter together. Note that you will only need to complete three of the conversations to activate this quest. Some of them can only be triggered by lines of dialogue that only happen once, so if the player has already heard that line before recruiting Veronica, the trigger won't occur. Note that there are three triggers that can never go away - the main doors at Camp McCarran Terminalgebäude, the entrance ramp of Vault 3, and traveling near Nelson or Cottonwood Cove. The Rumser museum trigger can be activated even if the player has already heard the tour, but not if Pete and the Boomers are hostile.

Here are the nine triggers, and the things Veronica says:

Some events may force the quest to start at a later stage, even if three of the above triggers haven't happened.