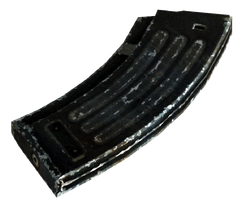 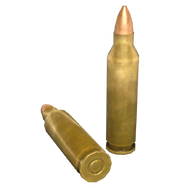 The 5.56mm round, a high velocity small caliber rifle cartridge, is a general-purpose round for all guns, spanning the entire game's arsenal, from the early varmint rifle to the light machine gun. 5.56mm is common, light, cheap, easy to make, and is considered one of two "small rifle" cartridges, the other being 5mm.

Standard and match hand load 5.56mm rounds can be crafted at a Nachladebank. A single cartridge requires the following ingredients:

Breaking down a standard 5.56mm round yields:

Armor-piercing rounds are designed for punching through armor plating. For this purpose they have a greatly strengthened case with a specially hardened and shaped nose. Due to the high muzzle velocity and penetrative properties of the round, damage to the target is slightly reduced. However, they can be rather hard to find, and vendors almost never have more than 200 in stock at any given time.

Hollow point bullets mushroom and break up on impact, causing massive trauma on fleshy, un-armored targets. However, this also means they break up when they hit things like armor plate, drastically reducing the weapon's penetrating power.

Introduced with the Gun Runners' Arsenal Add-On, match ammunition is precision-made so that every bullet has the same powder, shape, and weight. Match ammunition is often used in tournaments, sight alignment, and sniping. This ammunition type is given a slight damage boost and a significant reduction in the weapons spread. It requires the Hand Loader perk to craft.

A common commercial hunting round designed for civilian use, most commonly used in hunting small to mid-sized game. This ammunition does less damage, due to lower internal pressure, resulting in less stopping power. These rounds tend to put less stress on the chamber, resulting in better weapon durability. .223 ammunition can be bought in bulk from vendors. Prior to patch 1.3.0.452, these rounds had a -8 DT effect.